skip to main | skip to sidebar

Who Is Princess Salme 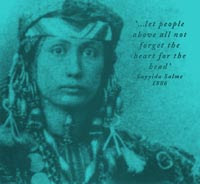 Sayyida Salme was born on August 30, 1844 as daughter of Sultan Said and Jilfidan, a Circassian concubine.

Her first years were spent in the huge Bet il Mtoni palace, by the sea about eight kilometers north of Stone Town. (The palace was mostly demolished in 1914). She grew up bilingual in Arabic and Swahili. In 1851 she moved to Bet il Watoro, the house of her brother Majid bin Said of Zanzibar, the later sultan and Beit el Saleh.

Her brother taught her to ride and to shoot. In 1853 she moved with her mother to Bet il Tani. She secretly taught herself to write, a skill which was unusual for women at the time.When her father died in 1856 she was declared of age, twelve years old, and received her paternal heritage. This consisted of a plantation with a residence, and 5,429 pounds. After her father's death, her brother Sayyid Thuwaini bin Said al-Said became Sultan of Muscat and Oman, while her brother Majid became Sultan of Zanzibar.In 1859 her mother died and Salme received her maternal inheritance, three plantations.
The same year a dispute broke out between her brothers Majid and Barghash bin Said of Zanzibar. Though she favoured Majid, her favourite sister Khwala made her side with Barghash. Because she could write she acted (at the age of fifteen) as secretary of Barghash's party. With the help of an English gunboat the insurrection of Barghash was soon brought to an end; Barghash was sent into exile in Bombay for two years and Salme withdrew to Kisimbani, one of her estates.Salme eventually moved back to Stone Town and made up with Majid. This earned her the lasting enmity from Barghash, as well as a split with her favorite sister Khwala.
The beautiful Princess Salme was very keen on learning about western cultures and she somehow managed to convince her father to permit her to take lessons in English. With her new acquired knowledge, she could easily communicate with the wives of western dignitaries, whose husbands came to greet the Sultan of Zanzibar - her father!
As she interacted more closely with her new found friends, the Princess came into contact with officers visiting or stationed on the islands, without her father's knowledge. Interestingly she developed an attraction for these officers!
She ultimately fell in love with a young German business representative from a Hamburg firm. This man was Wilhelm Ruete.
Because of her strict religious upbringing (Islamic), Salme was restricted (at the palace) from coming into contact with men, let alone western men. Her only alternative was to use the Royal household to deliver messages to Wilhelm.
As their affection for each other grew, it became more difficult for the Princess to conceal the truth from her loving father. A union between Salme, (coming from a Muslim Royal Family) and Wilhelm, a young German man would be totally unacceptable.
Her only way out of this impasse was to flea to Germany with Wilhelm. Their carefully planned escape somehow succeeded and they made their escape at night boarding a ship that was sailing for Germany.
Once in Germany, Salme married Wilhelm and adopted the name Frau Emily Ruete. Emily and Wilhelm had three children. Sadly, their life together was not to last long, as Wilhelm was tragically killed in an accident, not long after Salme came to this new land.
Luckily for all of us, Salme managed to write her memoirs which where later published and provided us with all the answers we were looking for.
The Ruetes settled in Hamburg, where they had another son and two daughters. They were:
• Antonia Thawke Ruete (24 March 1868-?), who married Eugene Brandeis (1846-1919) in 1898 and had two daughters.
• Rudolf Said-Ruete (13 April 1869- 1 May 1946). A journalist and author, with the rise of the Nazi Party, he resigned his German citizenship in 1934 and settled in London, becoming a British subject and dying at Lucerne, Switzerland after World War II. In 1901, he married Mary Therese Matthias (1872-?) and had a son and a daughter, Werner Heinrich (1902-?) and Salme Matilda Benvenuta Olga (1910-?). Through his marriage, he was a cousin of Alfred Moritz, 1st Baron Melchett, who became the first chairman of Imperial Chemical Industries.

• Rosalie Ghuza Ruete (16 April 1870-?), who married Major-General Martin Troemer of the Royal Prussian Army. Her husband died in 1870 after a tram accident, leaving Ruete in difficult economic circumstances because the authorities denied her heritage claims. Partly to alleviate these economic problems she wrote Memoirs of an Arabian Princess from Zanzibar, first published in the German Empire in 1886, later published in the United States and the United Kingdom of Great Britain and Ireland. The book provides the first known autobiography of an Arab woman. The book presents the reader with an intimate picture of life in Zanzibar between 1850 and 1865, and an inside portrait of her brothers Majid bin Said of Zanzibar and Barghash bin Said of Zanzibar, the later sultans of Zanzibar.After the death of her husband Emily Ruete was caught up in the colonial plans of Otto von Bismarck. There were speculations that Bismarck wanted to install her son as Sultan of Zanzibar. She revisited Zanzibar in 1885 and in 1888. Between 1889 and 1914 she lived in Beirut, Lebanon and Jaffa. She died in Jena, Germany, at the age of 79, from severe pneumonia.

In 1992 An Arabian Princess Between Two Worlds was published, making her letters home, with her reactions on life in Europe, finally available to the public.

There is a permanent exhibition about Emily Ruete in the People's Palace in Stonetown, the palace constructed by her brother, Sultan Barghash. 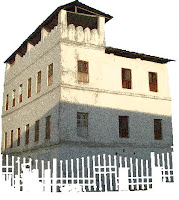 Our beautiful princess was able to briefly revisit her beloved home(Zanzibar) twice - the first occasion was on August 12, 1885 with her three children on a German ship called the "Adler"(she was invited by Kaiser Wilhelm) and again in 1888(her last visit to Zanzibar).

Princess Salme spent her last days on this earth in the foreign land she had now made her home - Germany. Her body was laid to rest in a cemetery in Hamburg-Ohlsdorf, where her in-laws were also laid to rest.
For More Information You Can Contact
Tel: +255 777 435303
Email: info@princesssalmeinn.com
Website: www.princesssalmeinn.com
Posted by Princess Salme Inn at 15:23